Communication as a tool 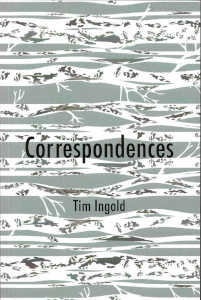 Tim Ingold is practising in this book the ancient art of letter-writing. His table of contents assembles under six headings 27 short texts written with an amateur pleasure, combining rigour & precision. Most were already published elsewhere. Correspondences is an anthology of his pleasure in writing, many about an artist.

An Au revoir concludes, as much as an Invitation initiates this masterpiece of crisp intelligence.

It is in the invitation that he takes great care in defining the rigour of amateurs he has endorsed here. I will spend some time in eliciting the defining characters of the term amateur he takes pleasure in setting here for us.

He succeeds in establishing what it means to be an amateur.

« In the Correspondences that make up this book, I have revelled in the the freedom to throw off the shackles of academic convention, & to write unashamedly as an amateur. All true scholars, I believe, are amateurs. Literally, an amateur is one who

Something should be added to the definition of what it means to be an amateur « lest we risk descent into crude populism ». 12